I participate in an early morning Bible study each week.  What a blessing – it is so good for my soul.

And we truly dedicate our time to studying the Word. To keep us on that track, we pass around a tablet to record prayer requests. Unless there is an urgent need, we don’t discuss these requests together.

We also pass around a jar for donations to a mission project. Through the years this group has funded numerous fresh water wells in Africa, and it has supported other projects, too.

Last year one of our members lost her husband unexpectedly. He was an active Gideon, and he also liked to pass out small wooden crosses to people in order to start a conversation about Jesus, or to those who he felt were in need. So our Bible study group decided to carry on a bit of his work in our mission project this year.

We ordered hand held crosses, made from olive wood from the Holy Land, and packaged them in holders with information cards. We set up a Facebook page for “LOU’s Mission.” And each member purchased some to share with friends.  The profits go to the Gideons International.

There were so many of my friends who had needs in their lives at that time. Two had lost husbands, one had a newborn with special needs, several had aging and ailing parents, three were facing cancer treatments, and some were aging themselves. The ten crosses I purchased were quickly given out and all were gratefully received. One friend, who had recently lost her father, asked to get more for her other family members. And I gave them to my own family members as well, just because.

Then last fall I had a really hard time with my right leg – knee pain, IT Band syndrome, torn meniscus, including surgery.  During this time I had some other health problems (all have resolved), but it was a painful and unsettling time in my life.

Often I would grasp my own holding cross as I went to bed at night, holding on to the promises and love of God that it represents. 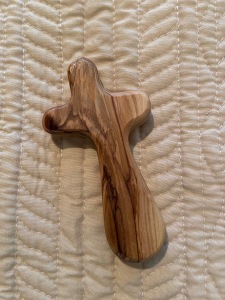 Holding this cross also brings assurance and hope during today’s health and economic crisis. Praise God, He remains faithful in all things.

Yet I still dare to hope when I remember this:

The faithful love of the LORD never ends! His mercies never cease.

Great is his faithfulness; his mercies begin afresh each morning.