We had dinner at High Point last night. 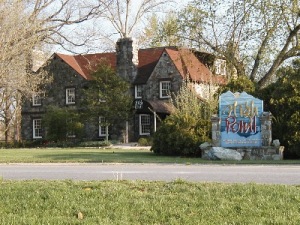 This restaurant in Monteagle, TN is in an old stone and brick house with lots of gables and chimneys. The website explains:

The 1929 mansion with original hardwood flooring and authentic light fixtures, presumably financed by Al Capone, was put on the National Register of Historic Places in December of 1997. The three-story compound once had escape hatches on the roof and underground tunnels in the basement used by Capone for the transferring of liquor in the twenties and early thirties. Local legend reveals tales of Capone and John Dillinger lounging outside on the mountain stone patio having drinks and playing numerous hands of cards.

We sat by a multi-paned window with dark, ebony stained trim that looked out on that same mountain stone patio, now lit with festive strands of small hanging lights. It was the same table (and server) that we had on our last visit. The floor was made of worn, one-inch planks of oak, and the fixtures were old brass with modern/vintage Edison filament light bulbs. We entered this room through another that held a bar, a fireplace, and a few tables. The first time we came, we were seated upstairs in a small alcove (tower?) room.

So much history in this place! If only the walls could talk.

The food was absolutely delicious, plated beautifully and served under a metal cover ceremoniously removed by the “charismatic and courteous” server to reveal the “delectable creations” we had ordered. (Quoted phrases also from the website.) The swordfish (with orange bourbon glaze served over a crispy corn cake) and the “black and blue” filet (with peppercorns and blue cheese butter) were incredible. Not to mention the butter lettuce salad, lobster bisque, roasted butternut squash with maple bacon butter and toasted pecans, and a real baked potato with a generous helping of butter, sour cream, and fresh chives.

Such variety and creativity in these meals! Is your mouth watering yet?

Our room held six tables situated in a horseshoe shape around the edge of the room, all taken care of solely by the same attentive server who called everyone “baby.” The other diners held stories (mysteries?) of their own:

Such character in these diners!  Each unique and very interesting.

Of course the best part was being with my husband and enjoying this tasty meal together. We took our time, too, and discussed things we were thankful for, along with hopes and dreams for the future.

My husband worked with a man whose great grandfather was a cab driver in Miami, and would drive Al Capone from Florida to Chicago (yes, in a taxi!).  I have no doubt that he, too, was familiar with this place. I’m not sure the food was as good back then, though.